Ovarian cancer is a disease in which cells in the ovaries multiply and grow abnormally. The ovaries are almond-sized female reproductive organs that produce eggs, as well as the female hormones estrogen and progesterone. Women usually have two ovaries located in the pelvis - one on each side of the uterus. If the genes that control cell growth in the ovaries no longer work properly, the cell divides uncontrollably and may form a tumour. 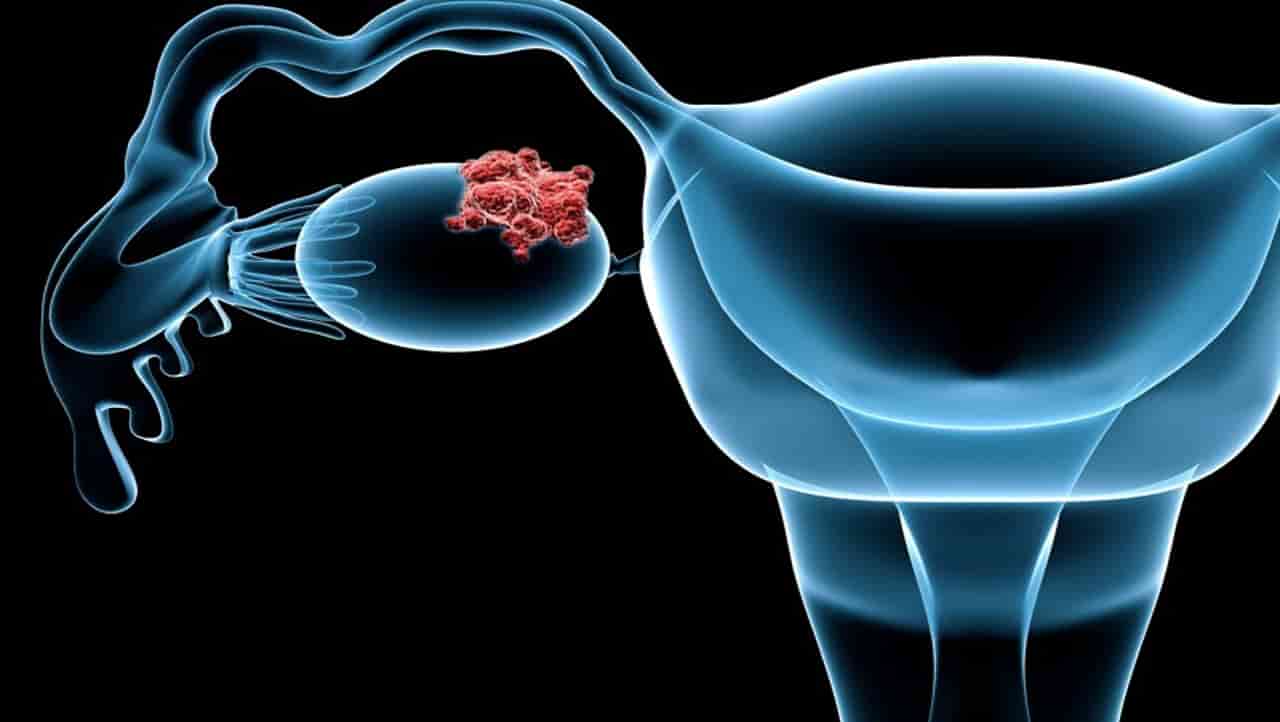 What are the different types of ovarian cancer?

Ovarian cancer can develop in different types of cells that make up the ovaries. These include:

Ovarian cancer rarely has noticeable symptoms when it is in its earliest stages. As the cancer progresses, subtle symptoms begin to appear, but they still may not be noticed right away, or they may be blamed on other common conditions, such as constipation or an irritable bowel.

The symptoms of ovarian cancer include:

Although the symptoms of ovarian cancer may be vague, particularly in the early stages, they are usually fairly constant and represent a change from how you normally feel. Symptoms also worsen as the cancer progresses.

If you experience any of these symptoms every day, or almost every day, for more than two to three weeks, speak with your doctor and specifically ask if you could have ovarian cancer. If it is ovarian cancer, the earlier we can diagnose it, the better the chances for an effective treatment.

The following tests and procedures can help determine if you have ovarian, fallopian tube, or peritoneal cancer (the peritoneum is a layer of tissue that lines your abdomen). They can also help in determining the stage of the cancer, and build a treatment plan specifically for you.

Following a pelvic exam, we may recommend you undergo imaging tests such as transvaginal ultrasound, which is considered more accurate than a traditional ultrasound test because it allows technicians to place a special kind of wand called a transducer into the vagina and physically close to the ovaries. Sound waves emitted from the device bounce off organs within the pelvis to help identify growths and possible tumours.

Another commonly used imaging test to look for abnormalities is a CT scan of the chest, abdomen, and pelvis.

A simple blood test to measure the level of the CA-125 protein can be helpful in making a diagnosis. This tumour marker can in some cases indicate the presence of ovarian cancer, since most epithelial ovarian cancer cells release this protein. However, because other types of tissue including non-cancerous tissues can also raise the level of this protein, the test isn't usually recommended for women who aren't experiencing symptoms, or who are at average risk for this cancer.

For many women, surgical procedures such as minimally invasive laparoscopy and robotic surgery are used to remove a sample of tissue for pathologists to determine if cancer is present.

There are four stages of cancer of the ovaries, fallopian tubes, and peritoneum, ranging from early to advanced cancer. 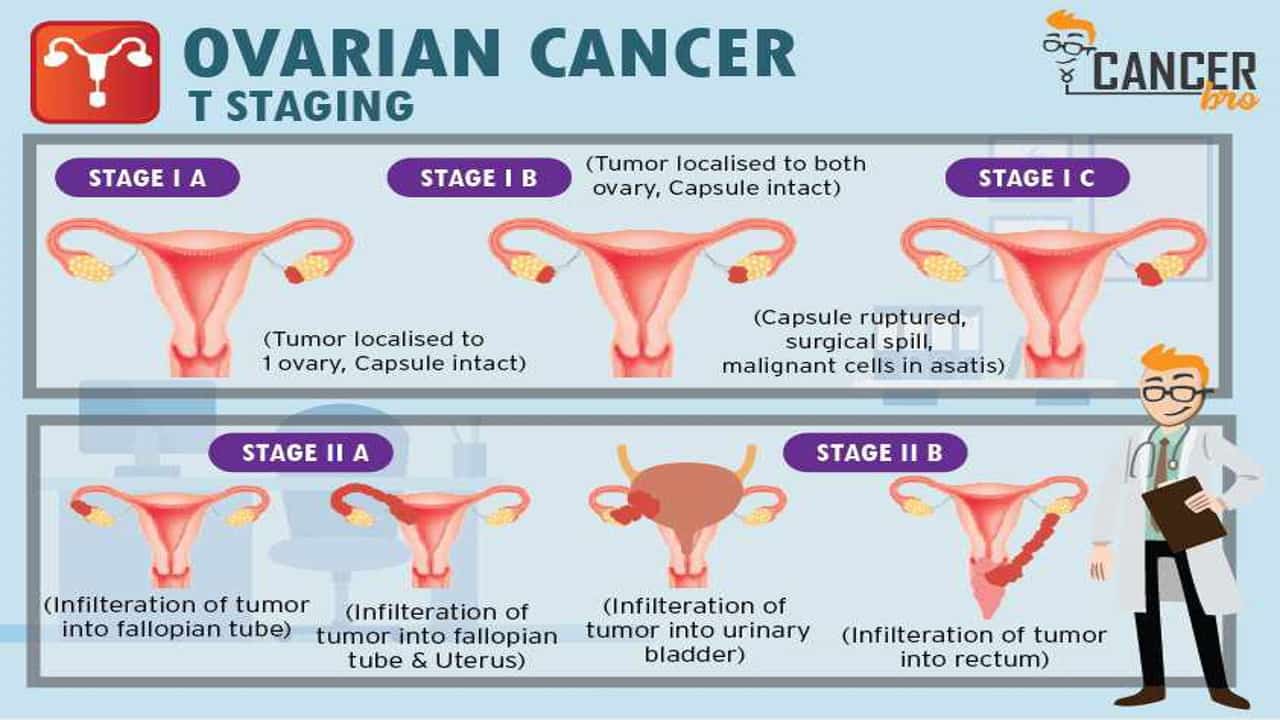 Stage I ovarian cancer is considered an early cancer. This stage is divided into three substages, A, B, and C:

Stage II cancer has begun to spread. This stage is divided into two substages, A and B: 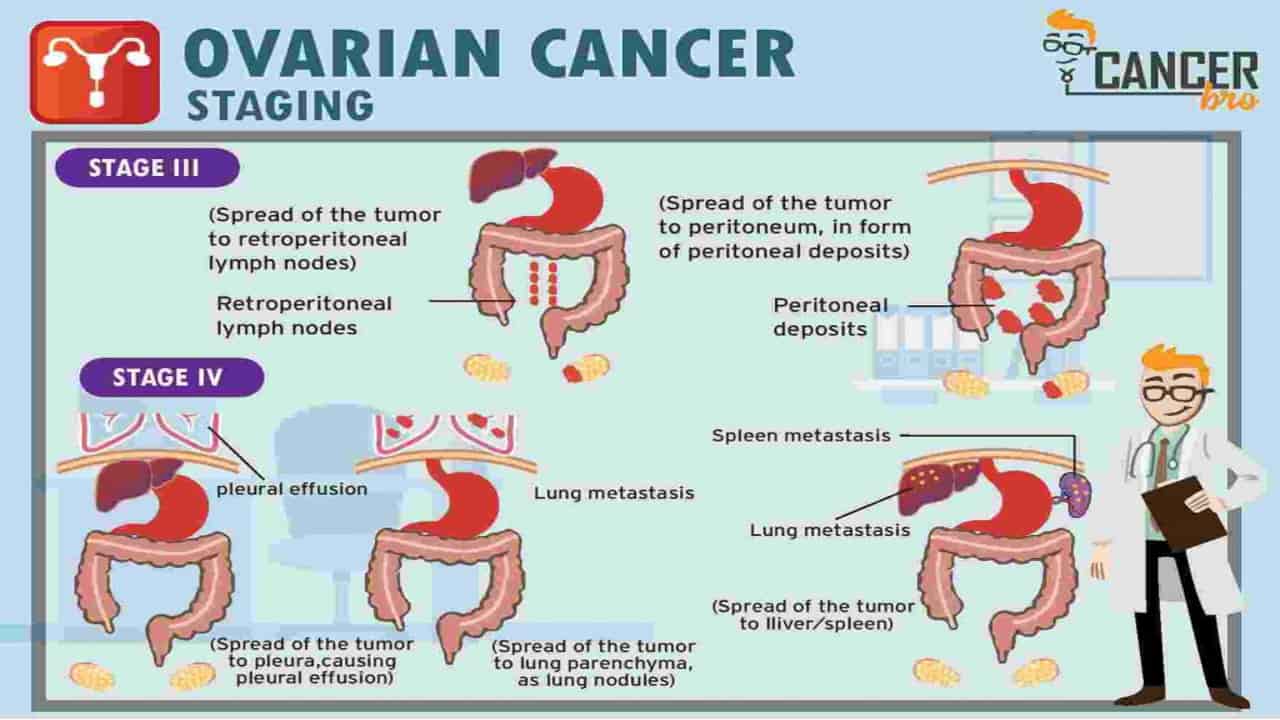 Stage III cancer is more advanced. This stage is divided into three substages, A, B, and C:

Stage IV cancer is the most advanced form of ovarian cancer. There are two substages, A and B:

Surgery is the main treatment for ovarian, fallopian tube, and peritoneal cancer. It's used for women with early and advanced disease, as well for women whose cancer has come back after treatment.

The type of surgery you receive depends on several factors, including the type and stage of your cancer, your general health, and whether you plan on having children in the future.

A) Laparotomy and Laparoscopy:

If you have early-stage ovarian cancer, meaning that the tumour is confined to the ovary and hasn't spread, one option to remove the tumour is a traditional open surgery, called a laparotomy. A laparotomy involves making a relatively large incision in the abdomen.

In many cases, we recommend a minimally invasive laparoscopy procedure that's done through smaller incisions. To perform laparoscopy, we insert a small video camera into the abdominal area through an endoscope (a device with a light at the end), and the surgical team guides the camera within the body.

For early-stage tumours, you might have a laparoscopy done to:

If your cancer has spread beyond the pelvis, and depending on how much the cancer has spread, your surgeon may need to take out parts of the omentum, the diaphragm (the thin muscle below the lungs and heart that separates the chest from the abdomen), and segments of the bowel, the spleen, and parts of the liver.

In many cases, we recommend a minimally invasive laparoscopy procedure that's done through smaller incisions. To perform laparoscopy, we insert a small video camera into the abdominal area through an endoscope (a device with a light at the end), and the surgical team guides the camera within the body.

If your cancer comes back (recurs), you may benefit from a second debulking operation, depending on how long the disease has been in remission and in what locations the cancer has returned.

For certain younger women, we may consider an approach that preserves fertility by finding ways to keep a normal ovary intact, as well as the uterus. As long as the cancer is at a very early stage it's sometimes possible to remove only the affected ovary (called unilateral oophorectomy) and fallopian tube, omentum, and lymph nodes preserving other pelvic organs necessary for fertility.

To destroy any tumour cells that might be left behind after surgery for ovarian cancer, many women receive one form or another of chemotherapy, which works by interrupting the growth of cancer cells.

There are several ways to receive chemotherapy medicines for ovarian, fallopian tube, or peritoneal cancer:

We tailor the type of chemotherapy we recommend to each woman based on such factors as the type and stage of her cancer. We also make adjustments along the way as we assess whether the tumour is responding. Today we also have options that include targeted drugs, which are often effective in identifying and attacking cancer cells while basically sparing normal cells.

While each type of targeted therapy works differently, all attack the inner workings of cancer cells - the so-called programming that makes them different from normal, healthy cells.

Targeted therapies for ovarian cancer include: